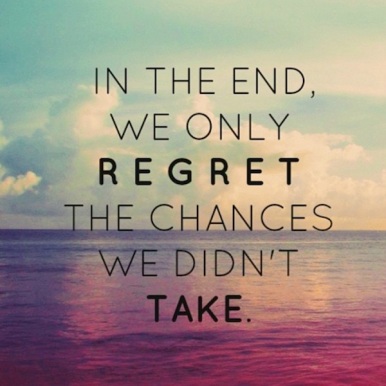 I had a guest post ready to go where I dish about the theme of my novel: regret, and how it inspired my protagonist, Tara Winters. For whatever reason it’s not up yet, but I’m going to share it anyway. I figure, why not? It’s already written. As for the blogger, I can cut her some slack. We all make mistakes that we regret. Tara sure did, and I’m pretty sure it’s what got her into this mess in the first place 🙂

The key theme in my latest novel, I Should Have Said Yes, is regret. You may be thinking it’s a melancholy saga, but the irony is that the tone is humorous and light-hearted. While it’s a serious topic, I wanted to have fun with it rather than exploring something heavy and dark. I’m all about happy endings. So why choose to write about regret? Because it’s relatable. We all have regrets and they impact our lives daily. It can be something as small as eating that extra piece of chocolate, to life-altering decisions like turning down the first bid on your house, which turned out to be the one and only. The thing is not all of us can or choose to do something about them. So I wanted to create a character who would embrace her past mistakes rather than allowing them to define her: Tara Winters.

Tara has always regretted that fateful day back in high school, when she told love interest D. J. Parker that their kiss didn’t mean anything. When in fact it meant everything. But he was a popular, accomplished senior and she a mere freshman—a nobody. Judging by his reaction it was the wrong thing to say and the decision has haunted her ever since. So she made a pact to say yes to any dating opportunity that came her way. Hence, Tara goes on a lot of dates. The book is a candid and entertaining look at this journey, all documented on her Adventures in Dating blog.

Tara meets countless Mr. Wrongs. But it only takes one to get to Mr. Right. It’s this thought that keeps her going. Even when she wants to throw in the towel and call the whole yes pact off, the memory of her past mistake still weighs heavily on her heart. It’s a burden she’ll always carry with her. But she feels empowered knowing she chose to do something about it. Saying no to D. J. has led Tara down a path she never expected. At first she created her blog as a forum to share her disastrous dates with friends and family. But with each hilarious new adventure, she attracts more followers—perfect strangers invested in her finding “happily ever after.” Tara realizes that as the quintessential singleton she has a voice. And she uses it to share advice about love and dating based on her experiences. As Tara would say, it’s often a lesson in what not to do. So while she regrets turning down D. J., she doesn’t regret where it’s taken her. That’s the funny thing about regrets: they can lead us down the path we were meant for all along. As for Tara, she’s come to realize that embracing no may just be the key to her happy ending.