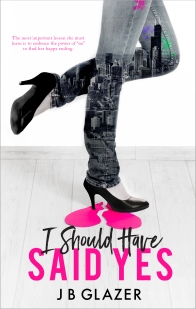 My Kindle campaign closes tomorrow. Click here to rock the vote and nominate I Should Have Said Yes. If I win, you win a free copy!

Most of you know that I self-published my first novel, Out in the Open. I had planned to do the same with my second when I came across an interesting opportunity. Kindle now has its own publishing arm, Kindle Scout. It’s what they call reader-powered publishing, meaning readers determine which books get published by nominating their favorites. In return authors get a small advance and marketing support.

At first I thought it was a no brainer. But then I learned that everyone who nominates the book gets a free advance copy. So I asked the million dollar question: will I earn royalties on those free copies? The answer is no. I kind of assumed that would be the case, but thought perhaps Kindle would still pay authors for those “sales.” I guess that’s what the advance is for. I was torn about what to do. Kindle Scout has a platform of readers that vote, but it’s also up to authors to get votes via their friends, social media channels, you name it. So I worried that by posting it on social media I would essentially be cannibalizing most of my sales. What’s a girl to do? And it kind of feels like a popularity contest. I always hated those.

But in the end I decided to go for it. My goal is to reach new people and this is a platform that would allow me to do that. I hope I succeed, but if I don’t at least I went down trying. So help a girl out and rock the vote. You can nominate I Should Have Said Yes here: https://kindlescout.amazon.com/p/1JBUQLMSF9YYA . And while you’re there you can check out an except of the first chapter.

Thanks for your support!!

2 thoughts on “Last Chance to Win a Free eBook”